Recently Archaeopteryx Birding and Nature Tours had the unique opportunity to visit and bird in Iceland for 8 days at the end of May/beginning of June. Our mutual friend, Lorri Lilja, asked if we would accompany her on her vacation that she had been planning. First of all, let me say that I loved visiting and touring around Iceland. It’s a beautiful country and with the spring snowmelt coming off of the glaciers and volcanoes, the country-side was full of wildflowers, Icelandic ponies and sheep, and birds everywhere! There are tens of thousands of birds to one human residing in Iceland in the spring. There are breathtaking waterfalls and streams rushing to the ocean. We even got to catch a glimpse of Iceland’s only native terrestrial mammal, the Arctic Fox, shedding into his summer coat.

As is typical of Europe, the food was amazing. All the restaurants we visited had at least one vegan option on their menu. We sampled some of the beer and liquor the country had to offer as well. Kaldi Brewery not only had the very best beers we sampled in the country, but they also have a beer spa in Árskógssandur where you can go and soak in a relaxing mixture of barley and hops. There’s beer on draft and a glass in the spa with you, so you can drink as much as you want within the time they give you to soak. This establishment is one of only four currently in business globally. The other three are also located in Europe.

Our birding adventure started as soon as we picked our car up from the airport. Lorri spotted several European Starlings (in their native habitat!) foraging in a field in town. But wait, what were those larger birds behind all the starlings? We backed up and low and behold- our first life bird of the trip! European Golden Plover! We then pulled off the road to a park we were not planning to visit next to Njarðvík Bay. Right away Lorri and I picked up our nemesis birds we could not find in Florida: Red Knot for Lorri and Common Eider for me. We watched Redwings with worms to feed their chicks, Common Eider females on nests, and even mating Arctic Terns. Yes, spring had definitely hit Iceland! Except of course, for the temperature. For these two Floridian tour guides, the 40 degrees Fahrenheit plus 35 mph winds, were a bit chillier than we had anticipated.

The following day we picked up our friend who had booked a later flight, Terrie Leibler, and the real adventure began. We started driving further and further away from the capital to explore the areas and find new and different birds. One of the highlights of the trip was the day we visited Snaefellsjoekull National Park where we found Snow Bunting, Northern Wheatear, Rock Ptarmigan, Razorbill, Common and Thick-billed Murres, Northern Fulmar and Black-legged Kittiwakes. This was one of the only areas in the northern part of the country where you can hike on a glacier, which we did. The views from the Raudholl trail were amazing!

We also visited Akureyri, which did not disappoint. We saw our Atlantic Puffins that everyone wanted to see and photograph. We had missed them up until this point, but when we saw them, we really hit the jackpot! We estimated 10,000 + puffins roosting on the cliff ledges and foraging in the ocean. We had Great Skua, their natural predator, fly by twice scattering all of the birds and being chased by gulls. The puffins were not on nests yet, but we did see signs of courtship displays.

The following day we went out to Lake Mývatn to observe waterfowl. Mývatn translates to midge- and we found out the lake is appropriately named. Each time we opened the door, several flew inside and clung to our clothing. The ducks certainly had enough food to raise their chicks! Lorri and Terrie got their Harlequin Ducks as well as Barrow’s Goldeneye, Eurasian Wren, Horned Grebe, Common Scoter, and several other species of ducks. We had high hopes for White-tailed Eagle and Gyrfalcon, but unfortunately could not find any. Gyrfalcon is considered a sensitive species of concern and therefore, it’s sighting records are kept hidden.

On the way back to Reykjavik, we stopped and picked up two new birds for the trip. We did find our White-tailed Eagles- two of them nesting on a rock island outside of Borgarbyggð. We also found Goldcrest at Fossvogur Cemetery in Reykjavik. The Goldcrest looks like a kinglet and sounds like a Cedar Waxwing. We were able to pick up on it’s soft, high-pitched sounds and locate a couple of these adorable birds. Not a bad evening for our last night in Iceland, I’d have to say. We ended our trip with a total of 73 bird species seen. I would definitely recommend anyone to visit this country if you get the chance. We will be leading tours here in the future, or upon request. One week’s time is only just enough to scratch the surface of the natural areas, culture, and scenery Iceland has to offer. 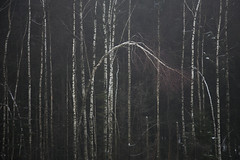