Download the PDF to read about our February 2020. We plan to run trips here again in the future. If you are interested please let us know and we can send you more information.

In early December, Gallus and I went on an exploratory birding tour
around the Bangkok area of Thailand. I had visited Thailand once in
2003 and went hiking in the jungle, but at that point in my life I was
not interested in birding ticks or photography. Gallus had never been
in Asia at all, so this was a brand new experience for both of us. We
landed in Bangkok with hopes of photographing unique tropical birds
and sampling spicy, vegan Thai cuisine. All of our hopes were
fulfilled and then some on our 1-week stay in this amazing country
never colonized by western civilizations.

We had 2 nights to stay at the luxurious V20 boutique hotel close to
Chatuchak Market. The hotel had an outdoor pool, sauna, steam room,
free shuttle to Chatuchak market, and a fitness center. It also had a
free breakfast- we had british breakfast of toast, mushrooms,
tomatoes, and baked beans with hot sauce. There was also a restaurant
and bar in the hotel and the staff was amazingly friendly and
accommodating.

Our first day we headed straight toward H.M. Queen Sirikit Park, where
we stayed to bird and take photos for a couple of hours. We found a
rare owl residing in the park called a Northern Boobook and I picked
up 7 other photo lifers including the White-breasted Waterhen that I
had been wanting to see. Unfortunately, we couldn’t stay as long as we
would have liked. Gallus got very sick with a 24-hour bug so we went
back to the hotel to rest. That night I insisted Gallus get in the
sauna to break the fever. It worked! A few hours of rest later,
Gallus’ fever was gone. And just in time for our birding/photography
guide to pick us up and take us out for a day of birding.

Brian of Thaibirdspot picked us up early from our hotel and we headed
to the Pak Thale salt pans south of Bangkok. Gallus was hoping to see
the critically-endangered Spoon-billed Sandpiper there, as this may be
a once in a lifetime bird. We arrived in the area and were greeted
with plenty of brand new bird species. Painted Storks, Red-necked
Stints, Lesser Sand-Plover, and Intermediate Egret were among the
several water birds seen. We ran into another birding tour group and
low and behold- there it was! The mythical Spoon-billed Sandpiper of
legends. Only one, and it was a little far away for a photo, but we
were extremely happy and felt lucky to have been able to see this
bird. We explored a little more around the salt pans and picked up a
few more species. A Black-capped Kingfisher perched in the shade sat
still while we photographed it to our hearts content and an adorable
group of Ashy Woodswallows sat on a telephone wire all clumped
together.

We birded the road all the way to our eco lodge outside of Kaeng
Krachan National Park. We saw Red-wattled Lapwing, Asian Openbills (a
stork), White-throated Kingfisher, Blue-tailed and Green Bee-eaters,
and Indochinese Roller. We were booked for 2 nights at the Samarn
birding lodge. The lodge had a Thai restaurant with Thai beer for sale
and wifi. They also had a private hide with a watering hole view
located behind the restaurant and a banana feeder that bulbuls and
leafbirds visited in the mornings. Brian made us a delicious lunch of
chana masala and naan and we sat and ate on the deck outside our room.
We decided to call it an early day so we could wake up refreshed and
ready to go out to the national park in the morning.

In the morning, we started our day with a nice breakfast of tofu and
broccoli at the restaurant. We found a few species on the property
before heading into the park. Sooty-headed and Streak-eared Bulbuls
were calling and flying around the property foraging. The Olive-backed
Sunbirds live and nest on the property as well. Outside the park we
photographed Vinous-breasted Starling from the car window. Inside the
park, we found one fruiting tree along the main road that birds were
visiting non-stop. I was able to photograph a secretive Green-billed
Malkoha, and several other species including the Oriental
Pied-Hornbill. My first hornbill species! Coppersmith and Blue-eared
Barbets were my first barbet species also! The Greater Flameback looks
like a smaller, golden Pileated Woodpecker. And Black-thighed Falconet
looks like an adorable chibi falcon. It’s small and pudgy and we found
a nest cavity with 2 adorable faces peaking out.

We stopped at the campground for lunch and we saw Dusky Leaf Monkeys
resting in the trees and hundreds of butterflies collecting minerals
in the mud around the showers for campers. The lunch consisted of a
Thai red curry with a type of gourd vegetable in it. The curry isn’t
like what we’d be used to in the states. It wasn’t made with coconut
milk and instead looked more like a soup with a transparent broth.
Back down the hill through the resort we encountered Dollarbird, a
beautiful flycatcher with a black head, turquoise body, and bright
pink bill. Back at the lodge, we sat in the blind for a while. A
Siberian Blue Robin and Puff-throated Babbler visited the pool of
water for a drink.

The next morning was the day we were all looking forward to! Brian
booked us the entire morning in a private hide in the jungle. Another
early morning and a delicious tofu curry (with coconut milk this time)
for breakfast. A Chestnut-headed Bee-eater joined us for breakfast as
well as the Golden-fronted Leafbird. A Greater Coucal hopped along the
road on the way to the hide. Once at the hide, it was like a dream
come true. Wild Red Junglefowl were the first to show up in the
morning. Gallus’ namesake bird, so of course we were excited to see
them in the wild in their natural habitat. We photographed two species
of partridge, Kalij Pheasant, Asian Emerald Dove, White-bellied
Erpornis, Black-naped Monarch, Racket-tailed Treepie, Black-headed,
Black-crested, and Stripe-throated Bulbuls, both Greater and Lesser
Necklaced Laughingthrushes, and the most rare visitor- the Blue Pitta!
A Lesser mouse-deer and 2 species of squirrels stopped by the watering
hole as well.

Back to Bangkok and this time at a different hotel, the Elizabeth.
This hotel didn’t quite have the luxury of the V20, but we made the
best of it. The hotel had a pool on it’s rooftop, a restaurant, bar,
and free breakfast. It reminded me of the kind of style and
architecture you’d see in the old-fashioned south, but it was clean
and the staff were very friendly. We had a fun evening and all of the
next day exploring the city and playing Pokemon Go. We met several
other Pokemon players, exchanged friend codes, and caught plenty of
Asian regional Pokemon. We rode in a tuk tuk and stopped at 2
different vegan street carts. The food was amazing! Thai corn
fritters, tofu, “pork” balls on a stick, spring rolls, soups, and stir
fry with “beef”. We bought a bottle of wine to go with our meal that
was very unique- a dry red made with lychee. And we visited Chatuchak
park and got another owl species- the Asian Barred Owlet.

On our last full day, Brian picked us up for another morning in the
field. This time to a rice paddy area located on the eastern side of
Bangkok. We found 3 species of weaver birds busily foraging and
calling to each other from within the reeds. The Red-collared Dove was
abundant in the area. We also photographed Brown Shrike and Siberian
Stonechat. And the most exciting bird of the morning for me was
Zitting Cisticola! This was the only cisticola species we missed
photographing in Cape Town, SA on our trip there in 2017.

Brian took us to a vegan restaurant on the way back to the hotel.
Brian and Gallus got veggie burgers and I got a spicy “chicken” stir
fry made with tvp (texturized vegetable protein). Brian liked the tvp
so much he even bought a bag of it to cook up and experiment with at
home.

All in all it was a great trip and I can’t wait to go back and show
people this country and it’s birds and wildlife that I’m getting to
know and love. We’ll begin offering tours to Thailand beginning
December of 2020 and again in late March of 2021 working with local
guides in the community. I ended the 6 days of birding with 66 photo
life birds plus some mammals, reptiles, butterflies, and other
insects. Gallus saw or heard 129 bird species for his life list.

Rebecca arrange at trip to Fort DeSoto PArk with Bob Sanders leading along with Beck and I from Archaeopteryx Birding and Nature Tours. We had 92 species including beautiful views of Wood Thrush, Kentucky Warbler, and Scarlet Tanager. Whimbrel was a re-lifer for Beck and group loved trip and many got lifers and stunning views of migrants.

We  lead 3 trips for the Bird of a Feather Fest and met lots of new birders and had a great time. Beck got Ruff as a state bird on Saturday’s trip. Friday’s trip nabbed Ash-throated and Vermilion Flycatchers. Got to spend more time with Greg Miller as well.

Rebecca Smith and Gallus Quigley of Archeopteryx Birding and Nature Tours rose early to drive to Shiloh Marsh in Volusia County, part of Merritt Island NWR to assist Greg Miller of Wildside Tours in leading 15 participants out to see saltmarsh sparrows. It was a foggy and slightly chilly morning as we hiked into the marsh. We had a few “muck sucking” incidents along the way and only managed one Saltmarsh Sparrow but we did see 52 other species, including this Bonaparte’s Gull photographed below, there as well and Greg Miller passed on his great wisdom of birding to all present. Rebecca Smith got a LIFER and number 300 on here Florida list! Congratulations Beck!

We met up with Eli Shaperow at Port Orange Causeway Park (Seabird Island) so he could take us to his Clapper Rail spot but while there we added American Oystercatcher, Red Knot (a lifer for one participant) and White Morph Reddish Egret.

We continued on to Ponce Preserve and everyone got Clapper Rail which was a re-lifer for Rebecca Smith who use to work with them back before she started keeping a bird list. IT was also bird number 301 on her Florida List.

We then headed to lunch at Norwood’s Eatery and Treehouse Cafe which was delicious.

After lunch we made an attempt to find the Common Eider that had been reported but had no luck so we continued on to Fred Reden Park and the great gull watch. Over 20,000 gulls on the beach and Greg Miller talked in detail about gull ID as we scanned for the “rare one” in the mass of gulls. In end we ran into Michael Brothers who as always finds the good stuff an Iceland Gull and as we were leaving for the day we had Parasitic Jaeger harassing the gulls on the water. 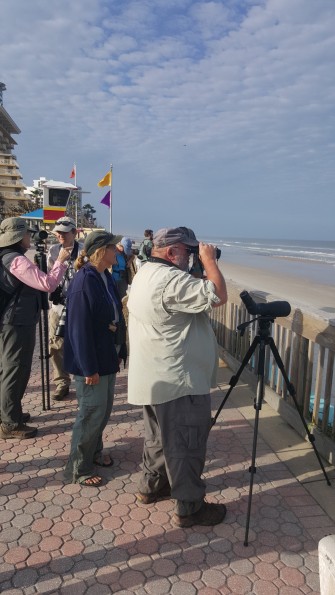 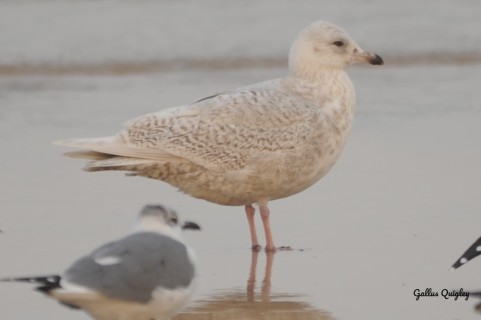 Rebecca Smith, Gallus Quigley, and Greg Miller finished off our day at Guru Indian Restaurant in Clermont with three (3) delicious vegan dishes and lots of beer to wash it down. We follow that up with some dark and stormy while relaxing on sofa after a long and productive day.